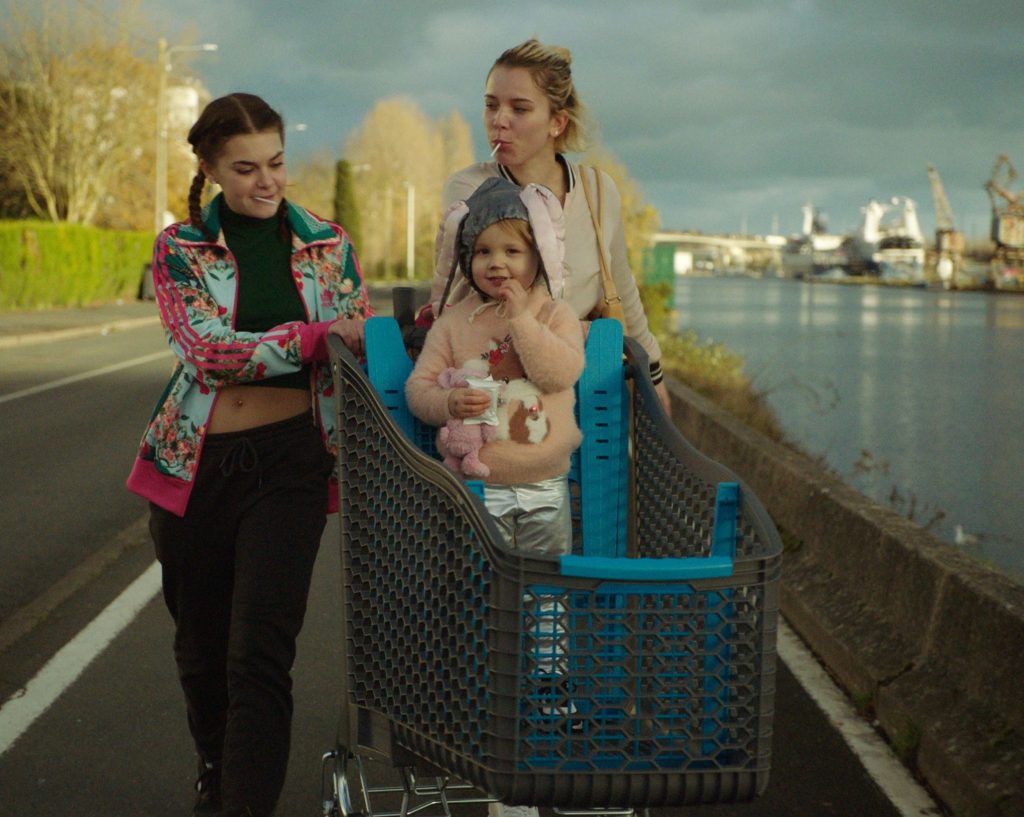 Sixteen year old Julie (Pili Groyne) is sanguine about the prospect of giving up her baby for adoption in six months time, having tried twice (with the assistance of her party-loving mother) to medically abort the unwanted pregnancy given to her by wet-behind-the-ears, BMX-riding boyf, Salim (Bilel Chegrani). The French legal system, however, has other ideas, instead placing Julie in a closed maternity unit with number of other mothers – some struggling with young children, others expecting imminently.

Julie Lerat-Gersant’s effective and affecting tearjerker hones in on the myriad and unpredictable responsibilities of motherhood (and pre-motherhood), and is unsentimental in its view of the domestic and emotional realities of young parents who have been placed in a situation they never wanted to be in.

The chaotic Allison (Lucie Charles-Alfred) being a case in point, who oscillates between smothering her asthmatic tot Diana in love, and needing to experience the euphoric highs of youth that she’s in constant fear of missing out on. A sequence detailing an all-night clubbing expedition – including a lively al fresco bop in the pouring rain – is capped with a haunting hard cut to baby Diana alone in the flat weeping and coughing, calling out desperately for her errant mother.

Julie, though, is the main protagonist here, as she militantly retains her desire to give up the baby at point of birth, knowing that she won’t be able to supply it with the life and love it deserves. Lerat-Gersant’s film is unsentimental in how it presents the context surrounding that complex moral quandary, and also how the situation she’s in could well influence a change in heart. Its focus on state reproductive provisions, and how they barely cover the range of needs required by this woman, lends the film its subtle political edge.

Despite a superficially close relationship, Julie’s haphazard mother (Suzanne Roy-Lerat) sees her own struggle with child-rearing in her similarly spiky and outspoken daughter. On the other side is social worked Nadine (Romane Bohringer) who desperately wants Julie to consider the possibility of becoming a mother, and not merely give up the baby as some symbolic gesture or punkish V-sign towards a society that has let her down.

It’s a conventionally put-together film, unfussily shot and edited, and with a classy soap-opera feel the the proceedings. Yet Groyne’s spirited and enigmatic lead performance carries things through, her ever-combustible arc and the tumult of her private life always threatening to send matters teetering over the edge.

The fact that she smokes heavily and rollerblades constantly through the latter stages of her pregnancy adds to the tension of her wellbeing while lacing the proceedings the a tragic honesty about young people not really being able to comprehend the gravity and precariousness of new life at that young age. The feel naturally drifts towards its will she/won’t she finale, and thankfully manages to stick its highly satisfying landing.

5 Best Fresno amusement parks that will make your summer sizzle!